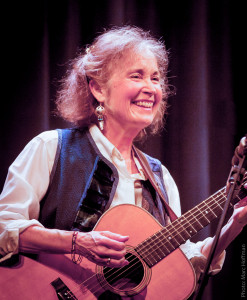 Linda Waterfall performing at Cornish College of the Arts in 2009

I taught songwriting at Cornish College of the Arts from Autumn 2004 – May 2012. In 2004, the school asked for an interview to post with the announcement of my hiring. I just stumbled across it, and felt that it makes a good introduction if you’ve never met me before, so I’m posting it as the first installment on my blog. You can also see some “historical” photos from my musical past, on the Photo Album page.

Which courses do you teach? Songwriting.

Why do you teach? I teach with the idea that I’m passing along the inspiration and guidance that made it possible for me to become an artist. In a hunter/gatherer society, everyone is an artist, integrated with the work of daily life. That’s in our DNA. We’d have a better society if that was still going on.

What brought you to Cornish? Chuck Deardorf called me. I’m grateful.

Where do you draw inspiration from? I’m inspired by spending time out in the wilderness. I like to read about science, especially cosmology and quantum theory. I’m inspired when I perceive excellence, in all artistic disciplines. Excellence is hard to pin down, but for me, it would include both a satisfying level of complexity and some kind of emotional impact and coherence. I also have a meditation practice which is very important to me.

What drew you to your field? I grew up in a musical family. I’ve been breathing it all my life.

Tell us about your creative process. First and foremost, it’s a mystery. Beyond that, I can say that I experience it as a ping-ponging back and forth been logic and intuition. Also, that a musical piece feels to me like an entity of some sort. The form I choose for it needs to honor “what the entity is asking for”. If I try to “paste something on it” that it doesn’t like, it will just fall off, sooner or later. Sometimes that can be a stuck place –preconceived ideas.

What projects are you currently working on? In September ’06, I am releasing a new recording — 13 tracks, 6 originals, 6 traditional songs that I have arranged, and one Beatles tune that I arranged rather differently from the original. So right now, I’m paying alot of attention to the process of releasing a recording. I have some fledgling compositions “in the nest”, which I’m noodling around with.

What do you do for fun? I love hiking. I do watercolors. (I have a degree in visual art) I like to read. I enjoy cooking. Renting dvd’s of standup comics.

What do you like most about Cornish? I’m totally thrilled by the inspiration of being in the Cornish community. When I accepted the position here, I assumed that I would find the students’ work interesting, but it has truly surpassed any expectations I had. Interaction with the other faculty members is also fascinating, and the special events…..I guess “wow” kind of covers it.